The never ending run.
This was our last backcountry ski trip of the season. A glorious week at Kokanee Glacier Hut. Now our attention will turn to two-wheeled travel.

Another holiday weekend, so, why not go for a bike ride. There are many opportunities around Vancouver and southwest British Columbia for micro-adventures. This time: Galiano Island, one of the few Gulf Islands I had never been before. Our ultimate destination was Dionisio Point where a Provincial Marine Park is nestled on the northern-most point of Galiano. Officially, you can’t get there by road. There is a road but it’s blocked by a gate, installed by private land owners in a dispute with the Island Trust. As a result, Dionisio Point gets few visitors which is just what we like.

We had reserved our spot with BC Ferries. Yes, you now need a reservation as a foot passenger to go from the mainland to the Gulf Islands but there is no fee (check the web site for more info). We had the luxury of leaving on a Thursday, avoiding even heavier holiday traffic the next day.

Once off the ramp at Sturdies Bay, we went to the store to pick up a few items (read: beer and wine) while what little traffic there was quickly dissipated and we mostly had the road to ourselves. It’s not a very gruelling ride but we did climb more than 500 metres over the course of 27 km. Up and down. Up and down.

Once past the gates, we discovered the camp site along the shore completely empty. There are two camp sites, both with 15 spots. We picked the one with the nicest prospect, a view northeast to the city and beyond and southeast to Mt. Baker, standing clear as a bell on the horizon more than 130 km away. To the northeast, we could even see the Black Tusk, also about 130 km away.

We spent the rest of the afternoon and the following day just hanging out in camp and on the beach. We made a couple of short excursions to get water but that was about the extent of our exploration. We were happy to just sit, read and watch the tide go in and out. Napping on the sun-warmed sandstone while a gentle surf caresses the shore is one of life’s luxuries that is beyond valuable, and completely free.

We had planned to move to Pender Island on the Saturday but realized that the camp sites there were bursting beyond capacity (thanks to the miracle of our space phones). Instead, we texted with our friends Val and Greg who were on Gossip Island visiting Greg’s son Phil and his partner, Autumn, who recently bought a property there. After a short stop at the store to pick up a few things (read: beer and wine) we rode to Whaler Bay to wait for a pick-up by boat for the short crossing to Gossip Island to spend a night camping at Phil and Autumn’s piece of paradise.

Gossip Island is a lovely place with about 50 properties. There are no roads, and thus, no cars. People get around by walking, cycling or with ATVs or golf carts. We spent most of the day just hanging out, chatting and exploring the island a bit. In the evening, we all helped make dinner and had a feast of BBQ-ed ribs, salads and veggies. A perfect day.

On Sunday morning, just about everybody had left early to go fishing but they had left us a small dinghy so we could get back to Whaler Bay. That in itself was an adventure for us. Give us a canoe and we’ll go just about anywhere, but something with a motor is another story. We managed to get across safely and hopped the ferry to Swartz Bay. From there a short ride to Sidney for a visit with our friends Deanne and Steve.

So, not a lot of cycling but a great weekend relaxing and hanging out with friends. Life is good.

Somebody left us a chess game made of driftwood and stones.

Basking in the setting sun on the shore of the lagoon.

Val and Jan on the dock of Phil and Autumn’s house.

Getting past the gate entering Dionisio Provincial Park.

Forested camp sites along the shore at Dionisio provide a great setting to spend a night or two.

The sandstone shoreline is slowly changing shape as a result of the erosive forces of wind and water.

A lagoon allows small boats to come in at high tide. 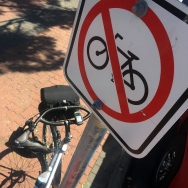 What madness is this?

Tidal pools to explore along shore.

Looking northeast from our camp site at Dionisio Point. 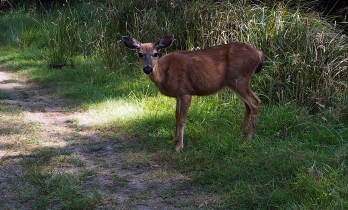 Intertidal zone along the beach.

Sunset over the lagoon and Porlier Pass.

Eons of waves hitting the shore have shaped the rocks into a smooth ridge. 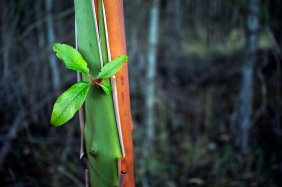 The red and green of a young arbutus tree. 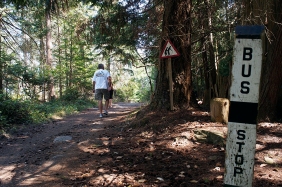 The signage along the Gossip Island trail. There is no bus. The only vehicles are ATVs and golf carts.

Cycling out of the Dionisio Point camp site.

Life in the cracks is nourished twice a day by the flood tide.

Erosional patterns in the rocks at Dinisio Point. 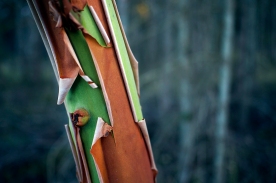 The red arbutus tree bark peels off like paper to reveal the bright green trunk.

Sundowner margarita at the pub in Montague Harbour.

Greg and Val taking us for a boat ride around the south end of Galiano to Montague Harbour for a drink at the pub.

A weather giant on the rocks.