Going anywhere on a holiday weekend can be a dicey proposition, especially the Canada Day holiday. It is the end of the school year, and therefore, the beginning of summer holidays for many people. The roads out of the city are often jammed and camp sites have long ago been booked. But if you’re willing to get off the beaten path a little, and don’t mind wild camping, the world is your oyster.

We decided to take our chances in the Okanagan to ride a section of the Kettle Valley Railway Trail that is not as popular as some other sections. Our friends Carol and Lawrence were going to join us for a bit of a shake-down for their upcoming cycling trip in Norway, but at the last minute, Carol cancelled to, unfortunately, go to a friend’s memorial service in Whitehorse, so it was just Lawrence and us.

We dodge most of the holiday traffic on our drive to Princeton where we parked the truck and headed north out of town on the KVR. The grade is gentle and we quickly leave Princeton behind. The thin forest gives way to undulating grass land as the trail snakes up, roughly paralleling the Princeton-Summerland Road.

We meet no other cyclists. Only a few deer who nervously check us out before bounding away. It’s quiet and serene. The pocket of grass land around Princeton eventually disappears as we enter the forests again. The condition of the trail varies but is generally in good shape. Unfortunately, ATVs have chewed up the trail with their aggressive four-wheel drive, and even though they are limited to low speeds, the ones we met were flying, although they did stop or slow down to let us pass. We even encountered some people in a Jeep.

We got off the trail near Osprey Lake as it was getting late in the day and the pitch was a bit too soft for Jan’s and Lawrence’s “skinny” two-inch tires. My 3-inch knobbies made it easy to cycle the rough trail. We rode a few kilometres on the road to Bankeir where we got back on the KVR to go to the forest service recreation site at Link Lake but it was full. We cycled on along the south side of Osprey Lake and decided to just camp along the trail near the west end of the lake where a sign with pictures of a lovely yellow labrador retriever announced we had arrived at Seymour Landing. A small, floating dock provided a perfect perch for us to sit in the setting sun to drink our lukewarm beer and make dinner.

At 1,100 metres, Osprey Lake is the highest point of this section of the KVR, about 460 metres higher in elevation than Princeton, so, our second day was a gentle downhill ramble for 75 kilometres, all the way to Summerland and  Penticton. We stopped in at a friend’s place for a quick visit and a cold drink before carrying on to the south end of Penticton where sun worshippers pack the canal between Okanagan Lake and Skaha Lake. It is a slow-moving flotilla of sunburned flesh on all kinds of inflatable contraptions, replete with lots of booze. We marvel at the spectacle in 30-degree heat. We make a quick stop at a beer store and leave the madness behind.

The campgrounds were filled to capacity and staying at any of them would not have been our idea of fun. Instead, we chose to cycle south on the trail along the west shore of Skaha Lake to look for a place to camp. The trail between the lake and the cliff is narrow but soon enough we find a lovely spot to make our home for the night.

Compared to the night before at Osprey Lake, it was a sweltering evening. I guess the 660 metres we dropped in elevation were to thank for that. But the beer was cold, the lake quiet and just the three of us in the world, it seemed. A nice ending to a lovely day.

From our Skaha Lake camp site it was just a short ride to Kaleden where we climbed the steep road up to Highway 97. We rode south for three kilometres along the highway before turning off onto the White Lake Road, a quiet secondary road that loops south before turning north to connect with Highway 3A near Yellow Lake. It’s a climb of 500 metres over 20 kilometres through wide open grass land. It’s lovely cycling without any traffic and much gentler than the highway. From Yellow Lake, it’s a 20-kilometre-long downhill run to Keremeos.

We bought some dinner supplies, beer and wine in Keremeos and headed out of town to find a place to camp. Unfortunately, we had a stiff headwind, as is usually the case in that valley. The wind blows from the northwest up the Similkameen River valley with nothing to redirect it. We beat into the wind for an hour or more before spotting a private camp site along the river that looked inviting enough to call it a day. It didn’t seem to make much sense to carry on hammering the pedals into the wind, especially with the holiday traffic on the road.

We bounced down the rough road into what was formerly a hay field and now a perfectly manicured camp site with picnic tables and flower beds. A couple of rudimentary washrooms provided the necessary comforts and we happily hung out for the rest of the afternoon and evening on the shore of the Similkameen.

The following morning, we only had a short ride on Highway 3 to just beyond Hedley where we could leave the highway and ride the Old Hedley Road all the way back to Princeton. No traffic. Lovely scenery. No wind. By noon, we were back at the truck and had lunch at Tomasina’s, the place to go in Princeton, as far as I’m concerned.

And so our Canada Day weekend ride came to an end. One of these days, I’ll take the bus to Castlegar and ride the entire KVR back to Hope. But that’s for another time.

Here is a map of our route. Click on it to open it in another page where you can zoom in and out and look at some of the GPS data from our ride. 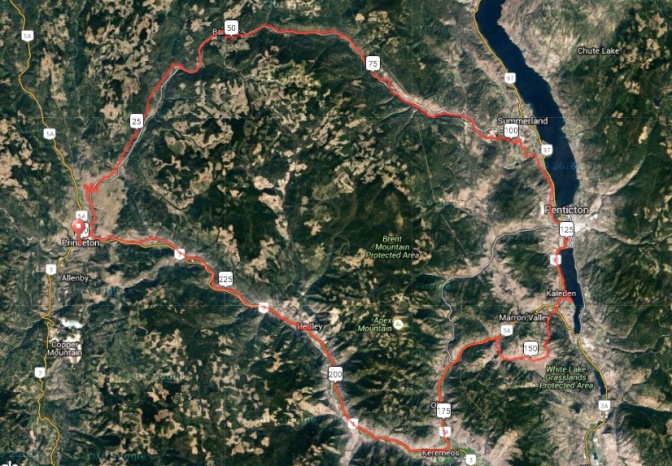 And a few more pictures from our trip:

Time for a well-deserved beer at Osprey Lake at the end of our first day. 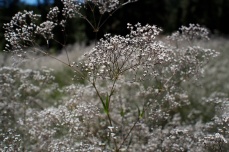 These flowers smelled like honey and lined the trail for many kilometres. 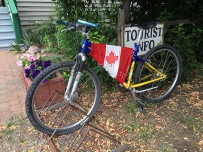 A Canada Day bicycle at the Hedley Mining Museum.

Jan and Lawrence riding on to another trestle bridge west of Osprey Lake.