Desperate times bring on desperate measures. After 97 km and 10 hours in the sun we needed shade. Having no luck finding accommodation or camping, this dry culvert offered respite.
Spain was too hot so we crossed the Strait of Gibraltar by ferry to Morocco where temperatures were a bit cooler, especially in the Rif Mountains where we’ve explored Chefchaouen, or the Blue Pearl, the last few days.

Jan and I revisited a loop on southern Vancouver Island with our friends Ellen and Elmar who finally arrived in Vancouver after 25 months of cycling from Sao Paulo, Brazil. Jan and I rode this Vancouver Island loop with some other friends earlier in the year and wanted to show the Els a bit of the Island. And what better way to do it than on a bicycle. Yes, even in November.

All in all, it was a soggy ride. It is, after all, a rain forest and it is November. Some rain is to be expected, despite the seemingly never-ending hot, dry summer we had that stretched well into fall. We even camped one night at French Beach because the weather was just too nice not to sit on the beach and watch the sunset.

The loop took us from Swartz Bay through Shawnigan Lake, Duncan, Lake Cowichan, Port Renfrew, Sooke and Victoria back to Swartz Bay. We spent two nights in Victoria, attending the Remembrance Day ceremonies and wandering around its downtown. The final day was by far the wettest as we rode the Lochside Trail back to Swartz Bay.

Ellen and Elmar are finished cycling the Americas, for now. Check their Bicycle Junkies blog for further adventures. Here are some photos of our soggy southern Vancouver Island ride. 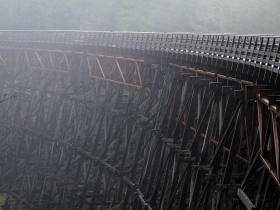 A swollen creek along the Cowichan Valley Trail. 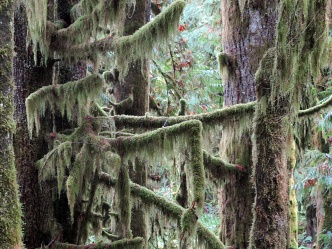 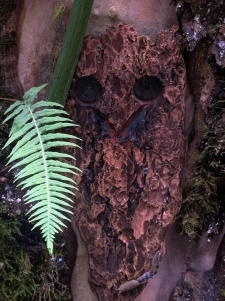 A mask carved from a piece of bark.

A giant spruce near Lizard Lake.

Ellen and Elmar heading south along the Pacific Marine Highway to Port Renfrew.

Bull kelp on the beach.

The Els in the waning sunlight at French Beach. 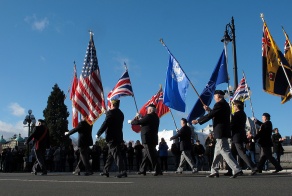 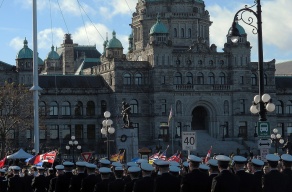 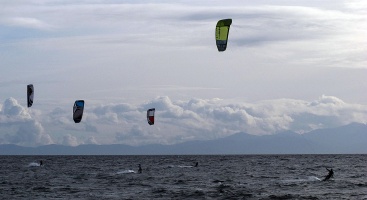